When a new client starts with us we give them a full body screening and movement assessment. This analysis helps us with the next stage of the process.

If you are not assessing, you are guessing. With the results of our assessment we are now able to design a plan and programme for our client to improve their body and mind. A better body and mind equals improved performance.

This is where the client does most of the work! They train to the best of their ability. If you are going to do something you should do it correctly. As movement specialists we are there to instruct our clients on how to move properly.

Monitoring performance is crucial to getting better. Its the same with movement. This ensures that our clients progress. We love to see our clients get fitter, healthier, stronger. All of this breeds confidence.

Director of Athletic Performance, Robbie Cannon has over twenty years of experience at the top level of amateur golf. Robbie recently won the Irish Close Amateur Championship at the European Club. Robbie also won the 2013 Irish Amateur Open Championship at The Royal Dublin Golf Club and the 2009 South of Ireland championship at Lahinch Golf Club. Robbie is also a current Irish international golfer representing Ireland in the recent home internationals.

With a huge interest in all sports Robbie played Gaelic football with O’Dwyers GAA club in Balbriggan from a young age and soccer with Glebe North FC and Drogheda Boys FC. In the last few years he became a keen sprinter and won a bronze in the 2013 Leinster Indoors at 200 metres for the Raheny Shamrocks Athletics Club.

Robbie specialises working with golfers of all levels including PGA Tour, European Tour , Elite Amateurs and club golfers. With over ten years of experience working in the world of Sports Performance, Robbie also works with athletes in a wide range of other sports including GAA, Hockey and Athletics. 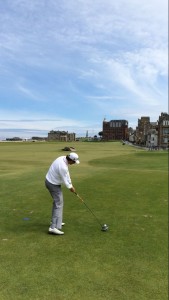 Part Two of Guest Blog with Daniel Davey
April 27, 2018Part two of our latest guest blog with Daniel Davey of Leinster Rugby and Dublin GAA. RC : Strength and conditioning has became more common in modern times with golfers. What do you advise for post gym replenishment? DD : A simple rule of thumb is that when you train intensely you must recover optimally to get the most from each training session. Recovery is something that is regularly discussed by athletes, coaches and sports science support but cannot be underestimated as it is during the recovery phase that athletes adapt, grow and become stronger. This is particularly important for young athletes aiming to gain lean mass during a muscle […] […] Read more…
Q + A : Episode 4 of the Guest Blog with Daniel Davey Leinster and Dublin Nutritionist
March 21, 2018The latest blog post in our guest series with experts in their respective field is Daniel Davey. Daniel is co-founder of FoodFlicker and a performance nutritionist currently working in professional rugby with Leinster Rugby and elite gaelic football with the Dublin football team. Robbie Cannon Daniel, First of all many thanks for taking some time out of your busy schedule to answer some questions for followers of the blog series! The majority of questions i get from clients regarding nutrition for golf is what to eat on the golf course. I always tell them that the most important part of nutrition for golf is the meal they have leading up […] […] Read more…
Blog Post from University of Louisville Golf Coach Aaron O Callaghan
December 30, 2016The latest blog post features Aaron O Callaghan. Aaron is the assistant golf coach for the University of Louisville Golf Team. This is a must read article for parents of anyone considering a scholarship to the USA.   RC Hi Aaron , Many thanks for taking the time to be a part of the Cannon Performance blog and I’m really looking forward to hearing your views and thoughts on the American college golf system. Its certainly been a big success for a lot of Irish golfers over the last twenty years. AC Robbie, The American college system has been a tremendous success for young golfers in many different ways. It […] […] Read more…
Take advantage of the warm up
August 19, 2016Gym workouts, like everything else in life, materialise  along  a spacious spectrum of efficiency. On one side of the spectrum, we have ample time to conduct the perfect session where everything we planned to achieve in our session is achieved. The athlete is engaged and is working hard.  Coach and athlete are happy. Progress has been made.   On the other side of the spectrum, we have sessions that are rushed. The athlete is not engaged. Learning and adaptation is minimised. Coach and athlete leave the session thinking that their time could have been better spent doing something else more useful.  The Average Joe, especially in the world of golf fitness, […] […] Read more…

We always highly recommend that clients come see us in person to get the best possible assessment and exercise instruction.  Anyone living within driving distance should always come in to see us for assessments and new programs. For clients living overseas or long driving distance online coaching can be an option. Online coaching has gained in popularity in recent years giving you easy access to your strength and conditioning coach no matter how far the distance is.

Here at Cannon Performance our approach to distance coaching services is based on a protocol of regular communication and assessments of your progress and performance.

Working with Robbie on my golf fitness has helped me a lot on the golf course especially in later stages of tournaments. Working on my fitness proved to be important in the British Amateur in 2012 when i won in tough conditions on the last hole of the 36 hole final

I have known Robbie for the past 4 years. Included in this time I have worked closely with him at the Darren Clarke Golf School. During this period Robbie has had a thirst for knowledge and passion for his vocation. His dedication and professionalism have left me with no hesitation in sending my clients to seek his help.

As a golf professional I believe that golf fitness will have a huge benefit on your golf game and Robbie is at the forefront of this industry.

Robbie has been working with my Junior elite squad now for 3 years at Holywood Golf Club and in that time has completely changed the fitness programs for all the individual players providing warmup exercises right through to the exact weight programs they should be trying with set programs and timescales. Since this has started the boys have gained distance through clubhead speed and this is all down to not only having the right technique but the body being in the correct shape to achieve these goals.

As a PGA coach I feel this is a vital area in coaching, especially starting from youth level and this will enhance not only my teams at Holywood but individually also.

I first met Robbie when we both played on Irish panels together a few years ago. He has since developed into a multiple championship winner and a full international as a golfer, and also now a leader in strength & conditioning for golf. I have recommended on many occasions that players I coach should get help from Robbie as I know him to be personable, knowledgeable, driven but most of all able to relate to them as competitive players. Any that have, found it very beneficial.

Robbie is starting to build a very good profile for himself and I hope it continues as Ireland needs professionals like him to help educate and train all the talent we have. I’m a great believer in ‘the physical allows the technical’, so I really look forward to working with him in the future to make my players potential even higher!

Working with Robbie has made me fitter and stronger and i am feeling the benefits of this on and off the golf course. As an elite player himself Robbie understands what is needed to be done to achieve peak performance.