It is a great pleasure to have Mr Frans Bosch next up on the blog. Some fascinating ideas that will interest a lot of coaches out there across all sports. 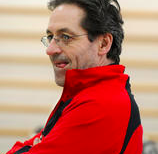 Since 1980 he worked in athletics, coaching elite sprinters and Olympic high jumpers and for some years as the national coach for jumping events.

Since 2005 Bosch teaches at the Fontys University for applied sciences in sports, mainly in the field of anatomy, biomechanics, strength training and motor learning.

Bosch has given numerous presentations on training related topics all over the world and frequently works internationally as a consultant in sport and as conference speaker on training related subjects. Clients in recent years are the English Institute of Sports, Wales National Team Rugby the British & Irish Lions, Japan National Team Rugby, England cricket, West ham United football and others.

Together with Ronald Klomp he wrote ‘ Running, biomechanics and exercise physiology applied in practice”, published in the Netherlands in 2001 and translated in English in 2005.

‘Strength training and coordination, an integrated approach’ is published in the Netherlands in 2012 and translated in English in 2015.

Hi Frans and many thanks for taking the time to talk to us about your work and your new book. When we first made contact you confessed you have no expertise on the golf swing but from following your work closely over the last few years in my opinion you have some great ideas and opinions on movement and how the body works.

One of the great topics of conversation amongst golf coaches would be best practice on how to make technical swing changes. As an athletics coach you have had to change many athletes technical patterns. As a golfer I know changing swing patterns can be a tough thing to do. Ive had many swing training sessions where I have had the technique exactly how both coach and I wanted both visually and sensory. Sadly over the following days carryover would be lost. Even the greatest players in the world struggle with this. Jason Day has been battling dropping the club laterally for 15 years reporting it to stick for a month but drop again. I feel you will be able to give an interesting insight in to how the body works when it comes to making some changes in a technical movement such as a golf swing.

Thank you Robbie and many thanks for asking me to contribute to this topic. Indeed I do not know anything significant about the golf swing and I will discuss from a more general perspective.

Movement patterns that we have learned tend to be persistent. The control system basically is conservative. It looks at a number of features of a movement patterns for making decisions on maintaining the old or switching to a new pattern and the features of the new pattern really need to be better then those of the old one before it will make the transition.

A second one is the stability of the pattern. The control system will hold on to a pattern if it is stable. With constructing a new swing, one also needs to convince the system that the new swing is more stable (requires less corrections, has lower energy costs etc.). Until that is proven the old one will prevail.

So what can one do to switch from old to new? Convincing the system that it is more successful is too difficult, since success will come in the far future. A better option is to address stability, not just by convincing the system that the new pattern is stable, but also by changing the environment (support, golf club, using elastic bands etc.) in such a way that the old swing becomes unstable.

Dividing the practice time between learning the stability of a new swing and associating the old swing with instability may be a more fruitful strategy than one focussing on the new technique. First change the environment in such a way that the old technique becomes unstable and then after a while switch to a new pattern. Disrupting the old pattern is a step that usually is forgotten in a leaning process and it may be the most important step in learning better skills

In my experience performance in golf requires both consciouss control and unconscious control.

In skilful players variability is found at the beginning of a movement pattern especially when it is done with low intensity.

Therefore in skill acquisition it is a good strategy to learn to swing from a big variety of starting/set up positions. It will teach better use of correcting mechanisms in the body and so improve the golf swing.

Conscious control, in the sense that one pays attention to the correct body position probably is counterproductive. It is one of the best researched aspects of motor control and motor learning. Pay attention to the environment, not to the body

Ben Hogan was renowned for practice and renowned for his several different set up positions. He was on to something back then! Another common issue we see as golfers going through some changes is taking it from the range to the course. The golfer has no problem putting the new swing changes into play on the practice tee during training but when they take it to the golf course or into competition it reverts back to type. What kind of protocols would you advise on how to train specifically for transfer of new swing changes to the golf course and competition itself ?

You are referring to the phenomenon of “reinvestment”

Why is this phenomenon occurring? One reason is personality. Some are affected by this all the time and others seem to never have the problem. A second and important reason is the way a skill has been learned. If in the first stage learning there is a lot of conscious processing of information and conscious control of movement one not just learns the pattern, but also learns to use the incidental control system for that pattern. This then will pop up in stressful situations. If conscious control is minimized in early stages of learning reinvestment is much less likely, because the system never learned how to use conscious control for that pattern.

The best players i have worked with over the years have had a few common qualities. One of them is incredible coordination. The ability to perform almost every exercise with ease.  So in my opinion coordination is a huge factor in being a successful golfer.  As a result i would use a lot of coordination training with my players. Research has shown us that strength and coordination are closely related. Would you recommend strength training for golfers?

It depends on what strength training. It can be benificial as well as counterproductive. Especially a sport like golf is sensitive to positive, neutral or negative transfer. Strength training can improve technique by improving the physical qualities or can be detrimental for instance when doing hypertrophy training. Therefor the notion “strength training is coordination training under increased resistance” is especially important for golf.

I completely agree. Thats why its vital to be training the correct way with the correct exercises.

Over the years the most talented golfers that ive worked with in the gym have played a lot of other sports when they were younger. I would be of the opinion that if an athlete has poor fundamental movement skills in their early teens they will struggle to develop world class sports specific skills. What would be your take on that view?

Absolutely. Playing a lot of sports teaches children to explore and improve building blocks of movement. Those building blocks require extensive exploration and need to be tested in all kind of environments. Only after being exposed to these environmental influences the bandwidth of stability of each building block is charted properly.

A good example is use of abdominals during the swing. Abdominal length is very critical for force production and therefor there is a rather precise defined bandwidth in which abdominals can work optimally. This means that shoulder-pelvis separation has to stay within limits. These limits need to be learned not trough detailed coaching but trough broad exploration in all kinds of movement patterns. Only with well defined building blocks one can build a complex pattern like swing effectively.

In gym based exercises it is important to try and stay within the phase of high intensity control. Obviously this is also important for practicing a swing. Variation, unstable environment, learning a full swing before addressing a short play chip etc. may provide tools in learning to develop the right control strategy.

Some golfers have several swing thoughts while they swing. Some have none. Ive played my best with one or zero thoughts. Talk to us a little on how our thought process affects our bodies abiity to hit the golf ball where we want it to go.

This again refers to mechanisms of reinvestment. Conscious control overruling automated control. For those that are interested in reinvestment the work of Rich Masters may be interesting. Combined with Gabrielle Wulf’s work on internal focus it shows that the conscious mind is not a good vehicle for motor learning / control. Implicit learning is better.

Frans its been fantastic to talk to you and I’ve got tons out of it. I know the readers of the blog will get a lot out of it.

For Europe
http://www.2010uitgevers.nl/products-page/sport-bewegen/strength-training-and-coordination-an-integrative-approach/
For the US
http://www.hmmrmedia.com/store/books/strength-training-and-coordination-an-integrative-approach/
Dr Liam Hennessy is next up on the blog and its one not to miss.
Thanks for reading.