Todays new blog post is the first of a new series where I collaborate with friends and colleagues in the world of sports performance. I have had some fascinating discussions over the years with people I admire and respect and I really liked the idea of co writing articles so we could get some of these insights out into the public domain. Im very excited about the project and looking forward to learning so much from it. Ive no doubt you all will too.

Our first co writer today is Dr Bhrett McCabe . Dr. McCabe is one of the leading sports psychologists on the tours, but also works with athletes from a variety of sports. He is the sports psychologist for one of the largest university athletic departments as well as an NBA basketball team. He is a licensed clinical psychologist and former collegiate athlete, having been on two national championship teams during his competitive time.

He owns The MindSide (www.themindside.com) in Birmingham, Alabama, and can be followed on Twitter at @DrBhrettMcCabe and has a great podcast on the Itunes Store – The MindSide Podcast. 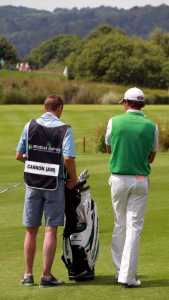 The weather has not been kind to us golfers here in Ireland this winter. Lots of rain and wind. I can count on one hand the amount of frosty mornings there has been which is astounding really. There has been very little of the sunny, calm and crisp days that are lovely to play golf in during the winter. But the days are getting longer and the spring is in sight. The golf season wont be long upon us.

No doubt many of you have been working hard on your game over the winter. Working hard in the gym getting in better shape. Making some technical changes with your coach. All positive steps to getting better. The schedule is out for all of the tournaments for the year and its a great time to plan the season ahead.  Getting the right schedule can be tricky. I know when I play too much golf especially in the busy summer months that my golf game suffers. Its quite common amongst the top amateur players in Ireland at peak season when there is several tournaments in a row. Mental fatigue mixed with physical tiredness. Now is a great time to introduce some protocols to help prevent mental fatigue in summer.

Before I hand you over to Bhrett here is a couple of things that ive seen the very best players do.

They are not afraid to take a complete break from the game.  Shane Lowry and Chris Selfridge have taken a whole month off this winter. They came back refreshed and itching to practice and play. So taking a break from the game even if it is a short break during the season is a great idea and it will freshen you up physically and mentally. You will not lose your swing if you take a week off!

The best players also seem to get their playing schedule exactly right. They never play too many weeks in a row. Its ok to miss a tournament here and there. You cant play in every tournament! Some players feel they have to play in every event where they would be better off picking a good schedule with some nice breaks planned and trusting themselves to perform in the events they play when they are mentally fresh.  With that in mind ill pass you over to Dr McCabe who will talk about another factor to consider at this time of year. Willpower.

Willpower – The Key to Success and The Partner to Guilt

As a psychologist, I am often approached to help an athlete or client “increase” motivation for an upcoming tournament, task, to lose weight, or get better in the gym. The call is usually the same – it comes from a frustated coach or parent because the player has all the tools to be successful, but under training and pressure, it appears that they are resisting growth. Something in their effort or progress highlights that there may be a motivation problem.

Motivation is a very unique concept. It is different for everyone and to complicate matters more, it is very dependant upon desires, fears, and stress. For instance, it would be easily assumed that every player on the PGA Tour is motivated to play well, but what is the motivation? For some, it is to become number one in the world, to win every tournament they face, and grow their status. For others that were number one, it may be to get back to number one, but the real motivation may be to not slip outside the top 10. They may say number one is their goal, but the truth is that the motivation to not fail may be a larger motivation than the one to succeed. Others may be motivated to try and stay on tour, to gain respect of others, and to try and survive. On the surface, they will have the stock answers of winning tournaments, but motivation is only displayed when the bright lights are off, when no one is watching, and most importantly, when they look in the mirror.

The complete concept of motivation is more than this blog entry, but motivation is very related to a concept of willpower – that internal motivation to do something and stick with it. When was playing, I used to watch teammates finish workouts, finish practice, and go for a run. I was amazed because normally after practice, I was exhausted and the last thing I wanted to do go do more physical training. I would feel really guilty that my teammates were doing more than I was doing, that I did not have the willpower that they did at that moment. While I was doing everything demanded of me, I felt guilty for not having the mental energy, motivations, and passion to do more. I felt that I was lacking willpower.

The truth was that I was not lacking willpower at all. All of my work was done and completed according to plan. I gave full effort at practice, worked my tail off in the gym, attended class, and studied hard. I was simply depleted at night – exhausted from a job well done of effort and commitment. The fact that I was not doing more was not a sign of an absence of willpower, but instead, my tank was empty. What I understand now is that willpower is not a trait but rather a resource.

When I get the calls from the coaches and parents, the first place I examine in those athletes are the demands they are having to face on a daily basis. Their willpower, like all athletes, is a resource that either gets invested in or gets withdrawn from during the day. The goal for all of us is to have enough in the willpower tank to pull on it when needed, but we cannot take withdrawls on empty accounts. There are no willpower credit cards – no Gold Cards, Platnimum memberships, or lines of credit. Willpower is what it is and what you have is what you have. Research has continually demonstrated ways to improve it and grow it, so let’s discuss it.

To maximize your willpower, here are few tips, both from research (I am not including the citations because these are general topics and not specific references) and my experience:

For 2016, look at trying to schedule and monitor your willpower for your success. Be different and do it differently to get better results this year. Remember, your willpower is not a trait your born with, but a skill, resource, and characteristic that you grow.

Many thanks to Dr McCabe for taking the time to contribute to the blog. I hope you all enjoyed it. Next guest on the blog will be Frans Bosch and we will be talking about the golf swing and exercise!